Bloomberg to the Rescue?


For John, BLUF:  The thing is, Mayor Bloomberg is no Mayor Giuliani.  Nothing to see here; just move along.
Here is Law Professor Ann Althouse on the rumor that former New York City Mayor Michael Bloomberg is considering entering the Presidential Race—"Galled by Donald J. Trump’s dominance of the Republican field, and troubled by Hillary Clinton’s stumbles and the rise of Senator Bernie Sanders of Vermont on the Democratic side...".

The quote is from The Old Gray Lady and Reporters Alexander Burns and Maggie Haberman.

He is kind of a combination of Trump and Sanders, isn't he?  America wants Bloomberg... it's easy to extrapolate, no?

Then she posts a poll, with these results (as off about 2200 on Saturday): 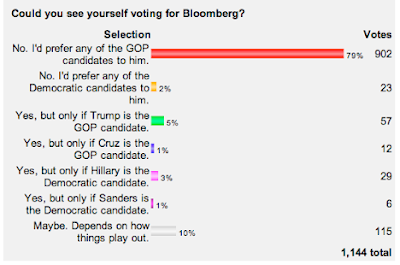