For John, BLUF:  Going to District Voting will likely not increase voting, but it will create more of an opportunity for corruption.  Nothing to see here; just move along.

This is a notice of a get together to discuss how we elect City Councilors and School Committee members.  There is, currently, a law suit against the City over how we elect those folks.♠

Here is how Ms Tauras starts her EMail:

This listening/feedback generation session on Wednesday (at LTC) is for downtown residents, regarding representation, voting, and the local election system.

The issue is that new Americans, immigrants from other nations, nations without our voting traditions, tend to be underrepresented because they tend not to vote.  This is an effort to address that important issue. 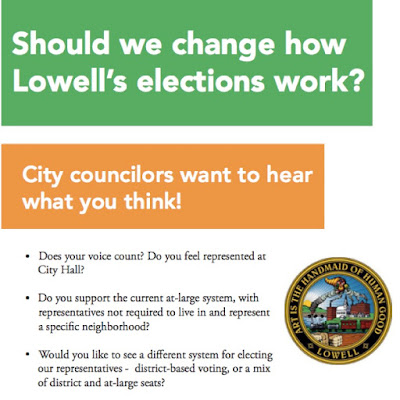 And here is the venue:

Your chance to be heard, which is the American way.

Since I am sending this out, I will offer my own opinion, which is that a change to district voting will only serve to dilute my vote and the vote of my neighbors, to a fifth its current value.  That said, if those who favor district representation can muster the votes to win in a fair election, more power to them and welcome to the electoral process.


♠  That said, Rumor Control, two Fridays ago, said the suit had been dropped.  Unconfirmed.  I have asked.