For John, BLUF:  Can't we all just get along?  Nothing to see here; just move along.
From The Korea Obsrver we have an article on the Virginia State legislature considering a bill to define how Virginia students will understand the body of water between Korea and Japan.  Will it be the East Sea or the Sea of Japan? 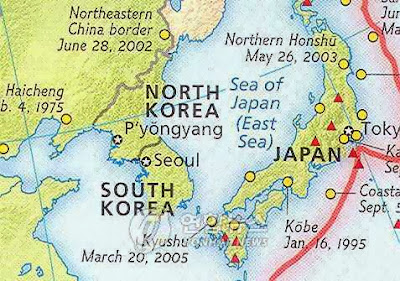 You say "Who cares?" but the naming convention is seen by Koreans as being a remanent of Japan's Imperial Past, which is not popular in Korea.  An indicator of the presence of Koreans in Virginia is that Korean is the second most non-English language spoken after Spanish.

This is definitely an indicator of the influence of immigrant communities on schools and legislatures.

And, it is an indicator that World War II isn't quite over in Asia.  Just this week, with Korean and Japanese peace keeping forces deployed to South Sudan, the Japanese loaned ammunition to the Koreans, which they blew up.  If the US pivot to Asia is to work we are going to have to help these two friends get along.