For John, BLUF:  An open discussion of this issue is good.  Nothing to see here; just move along.
I was down town and took these pictures of our holiday season displays on the Plaza adjacent to City Hall.  Last year we didn't have a City Wide crèche, it was set up on the property of Saint Anne's Episcopal Church,♠ but this year it is back.  And, as one would expect in our very diverse Community, not without some controversy.

So, here is the overall scene. 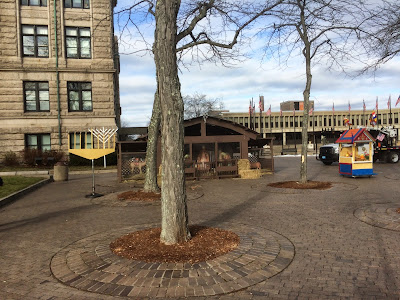 Here is the crèche itself: 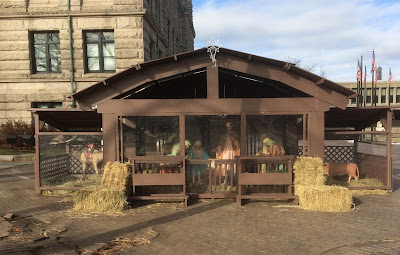 And here is the Buddhist display, up close. 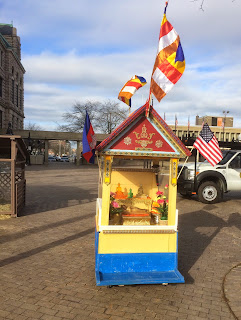 And here are two Hanukkah menorah, two because two different sources offered up a nine branched Menorah, to help us understand the miracle of the oil for the Temple Lamp.♥ 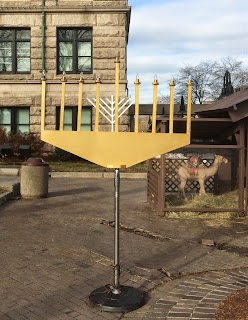 Does all of this conform with our First Amendment?♦  From the beginning our nation has had issues with religion, even when we thought we didn't.  Here in the Commonwealth of Massachusetts we ran folks out for not believing the right way.  Isn't that how we got Rhode Island and Providence Plantations?  In 1636 Pastor Roger Williams was banished from Massachusetts for his heretical views (the Pilgrims arriving in 1620).  When the delegates were meeting in Philadelphia to write a new US Constitution Catholic Priests could still be executed in Massachusetts for proselytizing.  Things did get better and sometime after 1800 Catholics could actually hold political office.

Last Sunday, Mr Michael Goldman, writing in The [Lowell] Sun, suggested the book The Return of George Washington: 1783-1789.  I already had the book on CDs, and have been listening to it as I drive around.  One interesting tidbit is that early in the meeting in Philadelphia to write a new Constitution the Virginia Delegation, minus George Washington, attended Catholic Mass one Sunday.  The next Sunday George Washington attended Catholic Mass.  Definitely not Roman Catholics and probably a bit anti-Catholic, none the less they displayed an openness to a heretofore despised faith group.  We, as a nation, were evolving.  We eventually evolved to the First Amendment and the idea of freedom of religion.

Since that time there has been a thread of "freedom from religion" moving to the fore.  These folks, who think they have no religion,♣ don't want to feel that any religion, however benign and watered down, is being shoved down their throats.  And rightly so.  This is America, where you reinvent yourself, any way you want, as long as you don't cause physical harm to someone else.★

The real question here is if we put at risk our freedom of religion if the Government, in any way, allows expression on public property.  Given that open space often belongs to some government entity, the question is if a public display can safely be placed on public property.

There is a secondary question as to if anything is gained from a crèche?  Is it some subliminal indoctrination, which needs to be avoided at all cost?

This being the United States, we turn to the courts.  A year ago our City Solicitor, Ms Christine O'Conner, Esq, suggested that the problems attendant to having a crèche are not worth the value derived.  What if someone thought our display was not sufficiently secular.  We would either have to fold our crèche and steal away or we would have to shoulder the burden (time and money) of going to court to defend our actions.

This year our City Manager, Kevin Murphy, Esq, talking on City Life this last Monday, made the point that the courts have allowed the display of a crèche as long as other displays are allowed.  Here in Lowell we have three different representations of religious beliefs on display, as the photos above show.  I would think that if members of the Church of the Flying Spaghetti Monster asked to be allowed to put up a display, we would have to accommodate them.  I am not sure why they would, but if they did we could put their display just north of the Buddhist display.  Or we could celebrate with a Spaghetti Dinner at the Polish American Veterans Club.

Here is a quick summary, with Links, of the legal issue in the US, from Wikipedia.

The one thing we all need to bring to this issue is a sense of humor and grace toward those who have a different understanding of God, creation, evolution, and the final things.  I think in Lowell we have an acceptable balance.

Totally unrelated to the crèche issue, this morning at Breakfast my wife asked me a about the Confessing Church in Germany between WWI and WWII.  This came up due to our Oldest Son sending her an article on Churches in Germany (we lived about six and a half years in Germany, off and on, while I was in the Air Force).  Germany has a history of religious wars and even, thanks to Chancellor Bismarck, given us the word Kulturkampf.  Incidently, Chancellor Bismark's efforts backfired.  But, even so, the Churches in Germany provided a basis for resistance to Nazism, including such heroes as Pastors Karl Barth, Martin Niemöller and Dietrich Bonhoeffer.  And down in Bavaria there was The White Rose movement.  Today, when it comes to freedom, those who are members of an organized faith and those who are not should not disparage each other, but look for common ground.

However, the really difficult question for the season is posed by NPR—is it "Less" or "Fewer".  This is, of course, referring to the sign in the fast checkout line at a store.  I prefer "Fewer", but I won't boycott the line that says "Less" if it looks like the "Quickest".

I wish you a Merry Christmas and a Happy New Year, and if you avoid Christmas, I sincerely hope you have a happy holiday season, full of family and friends and good cheer.

♠  Fitting, since Saint Anne is the Mother of the Blessed Virgin Mary and thus the Grandmother, on the Mother's side, of Jesus.
♥  For me the rededication of the Holy Temple in Jerusalem at the time of the Maccabean Revolt against the Seleucid Empire of the 2nd century BC is a powerful symbol of freedom.
♦  "Congress shall make no law respecting an establishment of religion, or prohibiting the free exercise thereof;…."  No law.
♣  There are those who argue that if you go back to the basic question, atheism is just one choice amongst many as to how one understands where we came from and where we are going.  Thus, in the broadest sense, a religion.
★  This proposition is being tested by Muslims, who claim harm from folks who characterize or defame their Prophet, Mohammad, and thus wish to suppress certain aspect of freedom of speech.  For example, the Jyllands-Posten Muhammad Cartoons Controversy.  That has reached all the way to Yale University.

Why does any municipality put up decorations to begin with?

Was there a lack of outside decor that created a state interest?

I take the all or nothing approach.

Make sense someone might want to put up a Nativity with it. Right?

Doesn't sound unreasonable, if the city is willing do so much.

I used to be opposed to all the creche-type displays, but then realized that it wasn't really the creche I disliked so much. I just wanted a peaceful place, a tranquil place, free of the incessant songs, the red/green everything, and so on. IS THAT SO MUCH TO ASK? I don't think so!