When Hollywood Was Patriotic


For John, BLUF:  When the stars we know were young.  Nothing to see here; just move along.
From the web magazine War on the Rocks we have "THE U.S. ARMY UNIT THAT WAS NOMINATED FOR AN OSCAR". 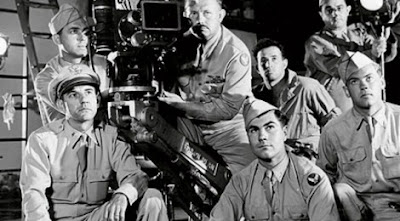 The Fourth of July often makes me think of President Ronald Reagan, the modern political master of the patriotic demonstration in the United States.  Also, the holiday is meant to be a day of unity in the United States — the one day set aside to celebrate our nation in its entirety.  Accordingly, today’s historical piece is a World War II-era training film entitled “Fighter Combat Formation: Attacks and Escort” that starred Reagan and is available on YouTube.

This training film wasn't the result of a contract, but of a special unit created to do this kind of work.

This film, and many others during the war, was made by the First Motion Picture Unit, U.S. Army Air Forces, one of the more unusual units in American military history.  This outfit had its beginning with Gen. Hap Arnold, who asked Jack Warner of Warner Brothers fame to create a unit to make recruitment and training films.  Warner agreed but asked for a commission as a general.  Instead, he got the rank of lieutenant colonel and command of the unit until it was fully up and running.

The author of this article is Professor Mark Stout, a Senior Editor at War on the Rocks.  He is the Director of the MA Program in Global Security Studies and the Graduate Certificate Program in Intelligence at Johns Hopkins University’s School of Arts and Sciences in Washington, DC.