Feminism Off the Rails?


For John, BLUF:  Bring on the Refugees, but tell them the rules, and enforce them.  Nothing to see here; just move along.
"Gloria Steinem, disrespecting young women:  'And, when you’re young, you’re thinking, where are the boys?  The boys are with Bernie…'"

Yet, notwithstanding, Ms Gloria Steinem is for Ms Clinton.

Here is the item I would like to dwell on.

Bill Maher lures [her] into other embarrassments, like when she asserts that feminism has no boundaries then characterizes the abuses in Muslim countries as something that needs to be dealt with within those countries, by Muslim women

Then, Ms Althouse transcribes the discussion:

ADDED:  At 6:36, Maher asks, "Is feminism something that goes beyond our borders?," and Steinem says "Oh, yes, absolutely, it is totally beyond borders."  Maher follows up:  "Then why aren't [sic] the way women are treated in the Muslim world considered more of a feminist cause?"  She says, "It is! Are you kidding me?  Of course, it is!"  She mentions the women in those countries who see it as a feminist cause, then tries to pivot away from Islam with "All monotheism is a problem."  And — wisely — "Islam being attached to the government is the problem."  Maher bears down: "40 countries have Sharia law and under Sharia law...."  He lists some very burdensome limitations on women. Her response is:  "A lot of feminists in the Islamic world are taking Muhammad's words and pointing out that, you know, his first wife was a real estate agent and smarter than him and richer than him."  (Maher says:  "A real estate agent?!  For what? Century 7?)  She says that in his day Muhammad was "a reformer on a lot of issues for women."  Now, it's "another story."  And then:  "Only you could get me to defend any monotheism.  I can't believe I'm saying this."  He says he's not asking her to defend Sharia law, only saying it should be a big cause for the people who fought for civil rights in the 60s and against apartheid in the 80s.  She says:  "It is, including for the women in those countries."

It could be that Professor Althouse is being hard on Ms Steinen, but I doubt it.

There is this German Facebook picture as presented by Weasel Zippers. 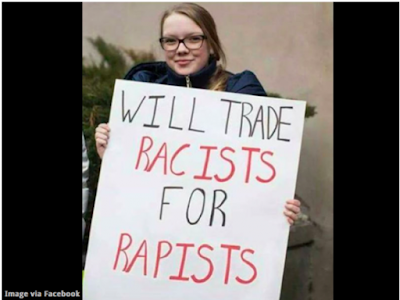 Perhaps harking back to the 1980s, the caption says RAF (Rote Antifi-Front).  The real German RAF, the Red Army Faction of yesteryear, was into murder and mayhem.

So, what we are seeing is that the bien-pensant, while concerned about sexism and the frequency of rape (especially rape and sexual assault on campus), are even more concerned about racism, and in particular, the apparent racism in the United States toward Muslims, although Muslim is not actually a race.  It is a religions, a religion with a certain percentage of members who believe we are in the end times and the Mahdi is about to appear and save the faithful.

What the left is lacking, what the Democrat Party is lacking, is a coherent picture of what is going on in the world and a prioritization of issues.

Well, and an understanding of what is going on about them.  The good news is this is not Europe.  The bad news is that without an emphasis on refugees assimilating, or at least not bothering the majority culture, some of the problems in Europe will come here.

For our own cultural survival we should accept that the Middle East is not culturally the West.  Here is an article from PJ Media, by Mr Raymond Ibrahim, dateline 8 Feb 2016, "Good News:  Female Muslim Prof. Says Muslims Can Rape, Rob Infidel Women Only in Some Circumstances".

[Non-Muslim] female prisoners of wars are “those whom you own.” In order to humiliate them, they become the property of the [Muslim] army commander, or of a Muslim, and he can have sex with them just like he has sex with his wives.

♠  Al Azhar University is a university in Cairo, Egypt, associated with Al-Azhar Mosque in Islamic Cairo.  It is Egypt's oldest degree-granting university and is renowned as "Sunni Islam’s most prestigious university".