Possibility of War in the Donbass


For John, BLUF:  Ever heard the phrase "Guns of August"?  Nothing to see here; just move along.
The Donbass 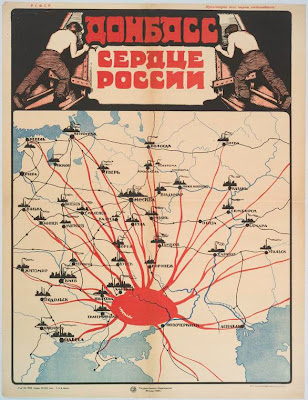 From Euromaiden Press we have this headline, "Putin calls an emergency State Duma session regarding Ukraine".

Now why would he do that?  Do you think that he is going to ask the Duma, the State Legislature, to approve a Russian move into Eastern Ukraine as a sort of R2P—Responsibility to Protect—action because of all the Russian speakers in Eastern Ukraine who are in danger from the Ukraine Government?♠

And why are there all those Russian speakers in Ukraine?  Could it go back to Joseph Stalin backfilling with Russians the dearth of Ukrainians in the 1930s, after the "Holodomor", when hundreds of thousands died of starvation, caused by the same Joseph Stalin?

At any rate, moving from what is now an embarrassing, and somewhat ineffective externally (Russian) supported subversion to a quick regular military cleanup may seem like the best solution to President Putin.  The question is, what will Ukraine, Europe, the UN and the US do?♥

♠  Someone out on the EMails reported a claim that "Russian troops are painting their helmets blue, the color of traditional UN peacekeepers."  That is interesting.
This gets to City Life host George Anthes and his comments about voting [no, not the ones where he suggested, incorrectly and scurrilously, that I wanted to go back to literacy tests for voting] but whether the voters neither cared about nor needed to know about Russia and the Crimea.  I wonder if they would care if their sons and daughters were marching off to war?

Those Russians are in Ukraine because the Bolsheviks assigned Novorossiya to the Ukraine SSR. Russian speakers have been in Novorossiya since Catherine the Great's armies conquered the Crimean Tatars making the area safe for Slavic settlement.