For John, BLUF:  What do we owe our brothers in distress?  Nothing to see here; just move along.
From The Globe and Mail (Toronto), Reporter Doug Sanders, we have "THE MIGRANT CRISIS:  HERE’S WHY IT’S NOT WHAT YOU THINK".

The point of the article is that the Refugee Crisis is long standing and that the nations around Syria and Iraq have absorbed a huge number of refugees, as shown in this chart: 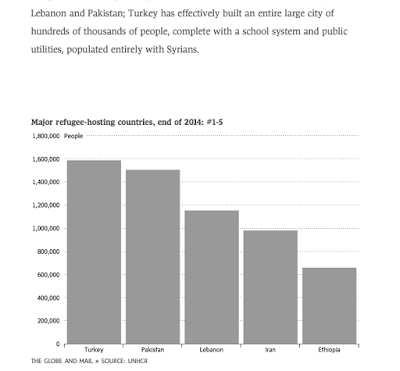 When we talk about refugees, there is an important legal distinction between refugees and migrants.

A.  Briefly, a refugee is person who has fled his or her country to escape war or persecution, and can prove it.

The 1951 Refugee Convention, negotiated after World War II, defines a refugee as a person who, “owing to a well-founded fear of being persecuted for reasons of race, religion, nationality, membership of a particular social group or political opinion, is outside the country of his nationality, and is unable to, or owing to such fear, is unwilling to avail himself of the protection of that country.”

Among those crossing the Mediterranean in the first half of 2015, the greatest numbers came from Syria, Afghanistan or Eritrea.  Syrians are widely presumed to be refugees because of the civil war there, according to the United Nations refugee agency.  Many Afghans have been able to make the case that they are fleeing conflict, the agency added, and Eritreans can generally argue that they would face political persecution at home in Eritrea, which is ruled by one of the world’s most repressive regimes.

A.  Anyone moving from one country to another is considered a migrant unless he or she is specifically fleeing war or persecution.  Migrants may be fleeing dire poverty, or may be well-off and merely seeking better opportunities, or may be migrating to join relatives who have gone before them.  There is an emerging debate about whether migrants fleeing their homes because of the effects of climate change — the desertification of the Sahel region, for example, or the sinking of coastal islands in Bangladesh — ought to be reclassified as refugees.