Bernie and the Executive Order


For John, BLUF:  If a politician can not convince the voters to elect legislators who will support his or her program, then modesty would suggest the politician has more work to do.  The idea of just bypassing the Peoples' legislators is not just unconstitutional, it is wrong.  Nothing to see here; just move along.

Here is the lede plus three:

The Bernie Sanders campaign has outlined dozens of possible executive orders that Sanders might enact upon assuming office, the Washington Post reported on Thursday.

“As we continue discussing the early work of your presidency and the progress we can make, below for review is a brief overview of executive actions you could take early in your administration,” read a document reviewed by the Post.  “We cannot accept delays from Congress on some of the most pressing issues, especially those like immigration where Trump has governed with racism and for his own corrupt benefit.”

Several of the executive orders would reverse President Trump’s policies on immigration, including an immediate halt of border wall construction, removing a limit on accepting refugees for asylum, and reinstating the Obama-era DACA program.

Other orders include a ban on the exportation of crude oil to combat climate change, and the severing of any federal contracts with companies that pay employees less than $15 an hour.

I was taught, in school, that the US Constitution was crafted to slow things down, to prevent any one person ruling by fiat, or some legislative house, responding to a recent election, rushing through major changes.  Majority rule, but with minority rights  Not minority in terms of race or ethnicity, but in terms of ideas.

Here is a look as Executive Orders issues by recent Presidents, by Calendar Year in Office.  Thus the drop off in the last year, for the time in office is less than a month, except for President Trump, where the last point represents mid-February. 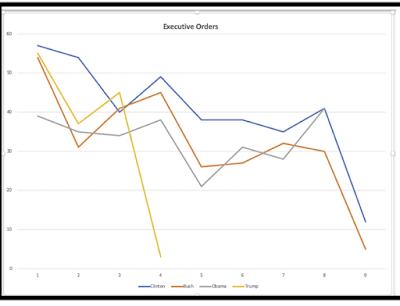 It worries me when a President goes into office planning on using Executive Orders to overcome the regular process of Government.  President Trump, and President Obama, tried to work with Congress before they picked up their pen and phone.  It smacks of last Century's Communist governments, Stalin, Mao and Castro, not to mention Kim.

As an aside, I am put off by people crying "racism".  It is a very unbecoming look.  I don't care how angry you are, you should not do it.