I was given a mission by my youngest son.  It was to do a recce of The Boston Fire Museum.  The Fire Museum is also on Facebook.

The hours of the Museum are somewhat restricted,♠ so I picked late Saturday morning to make the run.  I left Lowell about 1000 and returned by 1400.

Going down I-93 I had a target area map, but not a smaller scale map that would have shown the Boston area from Cambridge south toward the Kennedy Library.  I had not looked at the map sufficiently and thought the Museum was up in the area of the Garden.  As the map clearly showed, the Museum was down South Station.  As a result, I got off the Interstate right after coming across the bridge and drove down Purchase Street (and past a large Boston Fire Station with a number of vehicle bays) until I came to Congress Street and hung a left.  Across the bridge and past the Children's Museum of Boston and there it was on the left.  There was a parking lot on the right and another on the left ($12).  The spots are pretty narrow and getting out required the help of the chap taking the money (the car to my left pulled in too close). 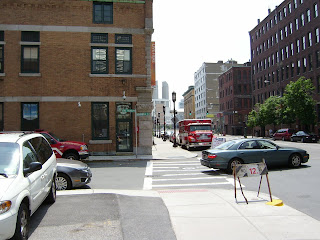 Here is the outside of the Museum, as seen from the parking lot I picked.  It is a long, two bay fire house.  Notice the Rescue Vehicle out in front of the building. 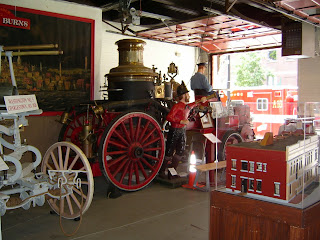 The second photo is of an older machine, as you can see by the models with their older uniforms.  Notice the steam powerplant on the back of the vehicle.  It is front wheel drive, as indicated by a notice on the front right wheel.

To the left, partly obscured, is an older, horse drawn machine.

Then to the front right is a model of the firehouse.

Since the Museum is free, it survives on donations.  I donated by purchasing a small size t-shirt and a small book on Firefighting in Lowell.

After visiting the Fire Museum I walked down Farnsworth Street♥ to, first, the Fort Point Artist Store.  I did find something to purchase, but note that they don't take American Express.

From there I walked next door, back toward the parking lot and at "flour baker + cafe" and purchased a cinnamon molasses cookie and an excellent brownie and headed home.  There were several couples with small children in the cafe.

♠  Although the two docents were talking about visitors on Friday, so I think there is some flexibility in hours.
♥  For any Farnsworths reading this blog.
Posted by C R Krieger at 4:19 PM