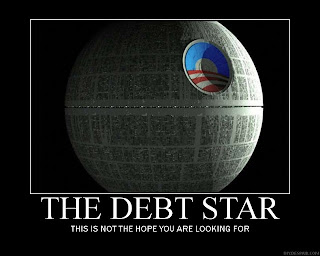 I haven't seen a lot of posts about the "Debt Star," but there have been a few and a picture of it showed up at a "Tea Party" in Columbus, Ohio over the weekend.

Glenn Reynolds, the Instapundit makes reference to it.  It is clever and it helps identify a serious issue about our future, the debt we will get trying to spend our way out of this economic downturn.  That is not to say Keynes was wrong, just that we didn't save up enough Federal money in the good times to help pay for turning the corner in the bad times.

If you haven't followed "Star Wars" you might not get it.

To be frank, however, I am still looking for hope, as I will blog about in a bit.  A former Army Chief of Staff, Gordy Sullivan (Norwich University) coined the phrase "Hope is not a method," and then, upon retiring, wrote a book of the same name.  At some level he is correct.  At another level, he is very wrong.

Hope springs eternal, even amongst Republicans.

As an independent, it is patently offensive to me that Republicans now act as if the first TRILLION dollars of bailout money pumped into this sewer Geo Dubya Bush once called his economy are now completely forgotten while vilifying Democrats for sending additional good money after bad in attempts to right an already-sunk ship. (Yes, yes, stuff happened during the Clinton years, too, but that's the point--where among the following eight years of plenty did the subsequent administration ever achieve anything that wasn't even worse???)

BOTH parties are party to this clusterf*** of profligacy, and, while we're on the subject, one might observe that the Republicans, for their insistence on achieving record deficits and run-up of the national debt in pursuit of their failed policy of international belligerence, are arguably the more responsible party of the two. But, no matter, the sooner we, the people, hold BOTH parties accountable for their squandering of the public purse, the better we will all be. (BOTH parties).

I would prefer that every time a thief sporting an "R" after their name accuses another thief with a "D" after theirs of some malfeasance, that we immediately make mental note to throw them BOTH out of office at our next available opportunity. Neither, after all, is offering any solution, only "We're not as bad as they are", and, frankly, neither side could possibly be right about that because they BOTH are the worst they could possibly be. At least by pointing fingers amongst themselves, they're helping us identify the culprits. (And how many parents who have two or more children are confused about "Mom/Dad he/she's such-and-such-ing", and the fact that both of the kids involved in such name-calling are obviously both party to the nonsense that provoked it?)

Or, put another way--anyone still calling themselves either should be making their plans to head down to city hall on Monday to unenroll themselves. Otherwise, we're all just party to the whole criminal enterprise.

I take Kad Barma's point, but parties are the only way those who aren't rich can run for office.  Mitt Romney can self-finance a campaign and bring in some extra money from rich friends.  Cliff Krieger has to raise the money within the limit of the law and doesn't have a war chest left over from the last five campaigns to jump start his efforts.  Frankly, I have no good ideas.  But, one party government is not the solution for me.  And, if the elections for Lowell city offices are really non-partisan, why do so many Democrats get elected and so few Libertarians, Socialists and Republicans?

I am old enough to remember when there was not this strong partisan rivalry in the "Solid South."  It was all about White Democrats.

That said, we need to keep hammering away at this until we find a solution.