For John, BLUF:  We need to "fix" society so there is less unrest, if that is possible.  Nothing to see here; just move along.
From Reuters we have a news report on Nigeria troops raiding an Islamist bomb-making factory on Wednesday, seizing guns, fertilizer and equipment for assembling suicide vests.

The raid was just outside the biggest city in the Nigerian north, Kano.  The city is on the southern boundary of the Sahel, the strip between the Sahara Desert, to the north and the grasslands to the south that runs some 3360 miles from the Atlantic Ocean to the Red Sea.  The Sahel tends to run from several hundred to 620 miles wide (north to south). 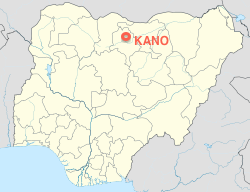 Nigeria is one of those nations that falls along the tenth parallel and has a population divided by that parallel, half Muslim and half Christian.  In Nigeria, as elsewhere in Africa, it tends to be Muslim to the north and Christian to the south.

The focus of this effort has been on the insurgent (terrorist) group Boko Haram.♠  From the article.

Kano has been relatively quiet for much of this year, as Islamist sect Boko Haram focuses its fight for an Islamic state on its heartland in the northeast.

However, Kano, historically a hub for trade across the Sahara, has been periodically attacked by the sect. A bomb blast in a bus park, in an area predominantly inhabited by Igbo Christians from the south, killed at least 15 in July.

Brigadier General Ilyasu Abbah, a Nigerian army commander in Kano, told journalists Boko Haram fighters had fled by the time his troops arrived at a house in the village of Gunduwawa.

I like to this article because it show that jobs are disappearing not just here in the US, but also elsewhere.  The local "suicide vest factory" has been shut down.

♠  The group is officially The Congregation of the People of Tradition for Proselytism and Jihad, but it is better known by its local Hausa language name, Boko Haram, which means "Western education is sinful".