For John, BLUF:  If Insurgencies move to urban areas it could be real ugly.  Nothing to see here; just move along.
The new rage in the study of guerrilla warfare and terrorism is urban conflict.  Not out of some DHS fear of domestic terrorism from so-called Right Wing terrorists (or former military members),♠ but because of what is going on in the rest of the world.

The very smart Dr David Kilcullen has a new book out, Out of the Mountains:  The Coming Age of the Urban Guerrilla.♥  It should be worth reading.

Then there is an article in The National Interest by Author Pablo Brum, "José Mujica and Uruguay's 'Robin Hood Guerrillas'".  Mr José Mujica is the current President of Uruguay. 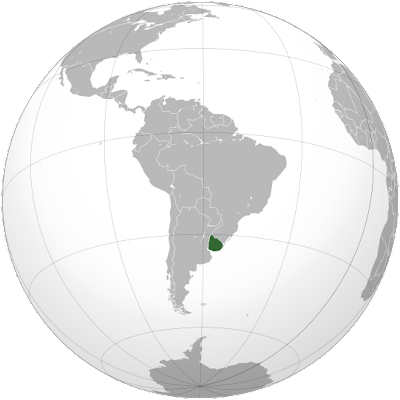 There it is, Uruguay, tucked in between Brazil and Argentina, as far south as the State of Georgia is north.

The National Interest article is an interesting read and quick.  It should raise more questions in one's mind than it answers, given its shortness.  It also talks to the frustrations of people in tense situations.  I remember the Uruguay/Tupamaro hostage situation way back in 1970, where an American was murdered in cold blood on 7 August 1970.  It was just a couple of weeks later that a Bill Ayers inspired group killed Dr Robert Fassnacht in the bombing of Sterling Hall, at the University of Wisconsin (24 August 1970).  One difference in the two events is that since 1970 Mr Mujica has evolved in a pragmatic direction, while Professor Ayers has just evolved into a dissembler.

♠  Like in this 2009 reportfrom Secretary Janet Napolitano's Department of Homeland Security.
♥  Here is a review of Out of the Mountains by National Defense University Researcher Frank G Hoffman.