For John, BLUF:  People love going to the shore and enjoying amusements.  Nothing to see here; just move along.

This is great and interesting history from a year ago.

Here is the lede plus one:

Beginning in the late 1880s, the Southern California coast sprouted piers that fronted new beach resorts made accessible by rail.  Most of the piers were connected to amusement zones – miniature Coney Islands – where ballyhoo, fakery, and slightly naughty entertainment brightened working class lives.  This is the story of one of largest of those playgrounds by the sea.

In 1925, Sarah Bixby Smith, who had grown up on the nearby ranchos of Los Cerritos and Los Alamitos in the 1880s, remembered picnicking on the deserted shore at what would become the crowded amusement zone called the Pike.

By 1900, Sarah’s lonely beach had become part of Willmore City (a brief failure) and then Long Beach (which had incorporated, disincorporated, and reincorporated).  The little town – Long Beach hardly more than 2,500 residents then – already had some seaside attractions:  the usual wood-frame hotels, a municipal pier, and “bath houses” for swimmers to button themselves into their flannel “bathing costumes,” as they were called then.

And then it goes from there.

I remember the Pike from the 1950s, with the roller coaster, the Cyclone Racer, and various stalls catering to sailors on shore leave.  One of the things that remains with me is sailors getting the cuffs of their jumper tops embroidered on the inside—"Liberty Cuffs". : One design I remember was a Chinese Dragon.

The location of the "Liberty Cuff" is on the inside, at the light blue ring: 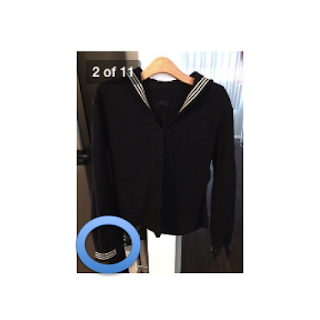 Rolled up, the cuff reveals the dragon, or other design: 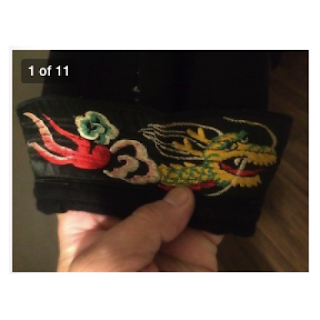 I didn't realize, at the time, what a wonderful world I was exploring and learning about.

As a side note, Long Beach is, today, the other big Cambodian-American City in the United States.

Hat tip to my Middle Brother.