For John, BLUF:  I think what this is saying is that a free market system across the globe, but not instantiated everywhere, means more safety for the population.  Nothing to see here; just move along.

Here is the lede plus three:

Bjørn Lomborg writes on his Facebook page of a reverse hockey stick graph, one that is certainly inconvenient to the gloom and doom message of climate alarmists who try to link regular weather events to climate.  So, Lomborg plays their game, and the results are surprising.
Fewer and fewer people die from climate-related natural disasters

This is clearly opposite of what you normally hear, but that is because we’re often just being told of one disaster after another – telling us how *many* events are happening.  The number of reported events is increasing, but that is mainly due to better reporting, lower thresholds and better accessibility (the CNN effect).  For instance, for Denmark, the database only shows events starting from 1976.

Instead, look at the number of dead per year, which is much harder to fudge.  Given that these numbers fluctuate enormously from year to year (especially in the past, with huge droughts and floods in China), they are here presented as averages of each decade (1920-29, 1930-39 etc, with last decade as 2010-17).  The data is from the most respected global database, the International Disaster Database, http://emdat.be/emdat_db/.  There is some uncertainty about complete reporting from early decades, which is why this graph starts in 1920, and if anything this uncertainly means the graph *underestimates* the reduction in deaths. 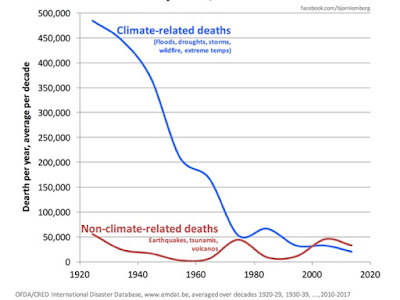 This doesn't prove that climate change doesn't exist, but it does suggest that in this more modern era we have more money and more infrastructure and more tools to aid in recovery from climate based disasters.