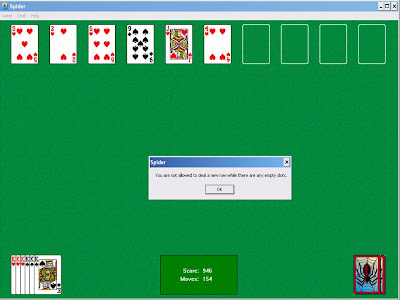 I was playing a game of Microsquish (c) Spider Solitaire on my VAIO computer. Things were going well. I had six packs down in the lower left hand corner with two deals yet to go.

Unfortunately, I had only six cards left to cover the ten (10) slots (four of which were empty).  When I tried to deal the next set of ten cards, I got the warning as shown—"You are not allowed to deal a new row while there are any empty slots."  Obviously, the code is not able to count the number of cards available and come to a correct conclusion—deal the next row.