Last week The Lowell Sun ran a front page photo of the participants in a Democratic Party debate amongst folks seeking the Senatorial nomination for 2012.  It was not a very flattering picture.  I think of her as a physically attractive woman and very bright, although somewhat misguided.  But, as you can judge for yourself, the snarl captured in the photo doesn't do much for her.  It reminds me of Representative Barney Frank and his way of dealing with others.  I think that he looks down on those he thinks are his inferiors—Republicans, constituents who ask challenging questions, Bill O'Reilly, probably Senator Chris Dodd (D-CT), but he couldn't say it out loud, since Senators are higher in the pecking order than mere Representatives. 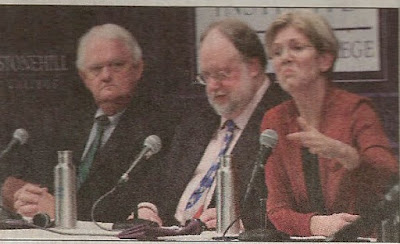 Credit for the picture goes to AP.

The photo at the UMass Lowell web site with the latest poll numbers, Warren in the lead, was not very flattering.  Is she trying to be the "tough guy"?

Then there was the Sissy Willis piece at the Riehl World View, "I'm you:  Elizabeth Warren channels Christine O'Donnell".

Whenever you stoop to these sorts of ad hominem partisan snipes I am disappointed. Your content is usually of higher quality and of more relevance to even the slightest topics. This seems just a mean-spirited whinge that a "D" politician is getting attention at the expense of your sacred cow "R".

I still think the photo selected by The Sun was one that did not show Professor Warren in the best light, D or R.