We Are One People

I was over at Dapper District just now and came across this photo, supposedly taken on 7 December 1941, at Pearl Harbor.  I was a little dubious, and rightly so, but, in fact it is a real photo of four women at Pearl Harbor, Navy civilian workers, doing fire fighting training, some time during WWII. 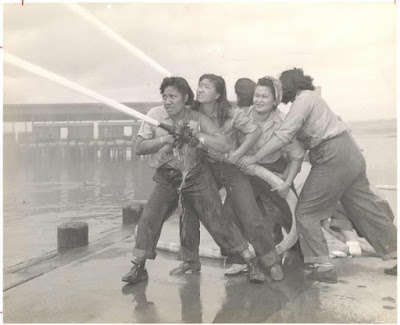 Dapper District wove the photo in after mentioning issues of class and economic status in a blog post.  For the photo he linked to one site for reference, which linked to another.  Tracing back through the links I came to this item from MSNBC, which gives the fullest story.

My take-away is that we can all work together for the good of the nation, and from the last link, have fun doing it.

One of the women in the photo is Katherine Lowe, born in August 1915. She was 26 and married at the time of Pearl Harbor.  In the article she is quoted as saying of the firefighting training:

It was a lot of fun. We'd shoot water at one another.

In the photo the four women are, left to right, Elizabeth Moku, Alice Cho, Katherine Lowe, and Hilda Van Gieson. Katherine Lowe and Elizabeth Moku were friends before Pearl Harbor and on their way to church when the attack happened that fateful Sunday 70 years ago.