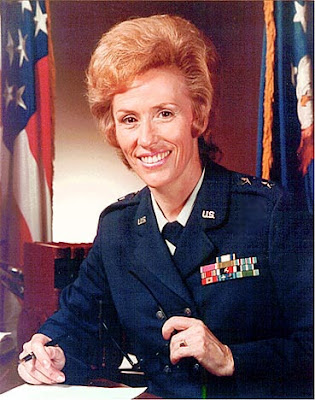 Jeanne M Holm was our first US Air Force female general officer and our first to make it to two stars—Major General.

I never met the lady, but she was a big deal back in the day.  She was a leader, not just of women, but of people, and she lead the US Air Force into the age that recognized the value of women as members of that Service.

General Holm was a doer.  If you look at her fruit salad (her ribbons) you will notice one in the middle and colored white, black, red and then white again, with an airplane on it.  That would be the German Occupation ribbon with the Berlin Airlift Device.  She didn't get that sitting in Louisiana.

Holm served in a variety of personnel assignments, including director of Women in the Air Force from 1965 to 1973. She played a significant role in eliminating restrictions on numbers of women serving in all ranks, expanding job and duty station assignments for women, opening ROTC and service academies to women, and changing the policies on the status of women in the armed forces. During her tenure, policies affecting women were updated, WAF strength was more than doubled, job and assignment opportunities expanded, and uniforms modernized.

A pause in memory of and a vote of thanks to Jeanne M Holm, Major General, USAF (retired), now gone on to her just reward.