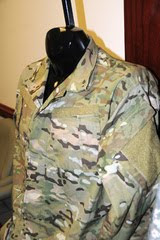 There it is, the new US Army Utility uniform for those assigned to Afghanistan.  Yes, this will be different from the Utility uniform being worn in Iraq— and there is some logic to that, given that Iraq may provide a somewhat different background into which one might try to blend.  The news report I found was on Buffalo (New York) TV.

Uniforms are important in that they are part of the criteria for being considered a legal combatant, and thus protected by the Geneva Convention.  Get caught out of uniform and you could be considered an unlawful combatant or a spy.

One wonders if this new uniform was developed by the Army Research Laboratory a little south of us, Natick Soldier Research, Development and Engineering Center.♠

The news story tells us that this new field uniform was developed in four months:

The secretary of the Army announced Friday that, starting this summer, the Army will provide combat uniforms in the MultiCam pattern to all soldiers deploying to Afghanistan in support of Operation Enduring Freedom.

The Army says the decision follows a rigorous four-month evaluation and reflects its commitment to giving soldiers in Afghanistan the most effective concealment possible.

Rumor Control has it that this development effort came about after soldier complaints rose to the level of the US Congress.

And for those of you who wonder why everyone doesn't wear the same thing—it died in Conference Committee.♥

♠  While at the Natick web site I did come across this neat thing, the BCU, or Beverage Cooling Unit.

Utilizing an extremely efficient design in a small footprint, the cooling system is capable of chilling water in a standard water container a minimum difference of 40°F in 25 minutes in ambient temperatures up to 145°F.

But, in the end, there will still be a need for Gunga Din to bring the water, but this will be worth its weight in gold.  Back in the day, when I was in a fighter squadron many of the crew dogs would put a canteen in the freezer in the squadron and just before stepping to the jet take it out and put it in a pocket of their G-Suit.  Too cold to drink at the time, but great 60 or 90 minutes into the flight.
♥  Someone did try to put some standardization into this Battle Dress Uniform issue with this language for the Fiscal Year 2010 Defense Budget, but it died in Conference Committee.

The Secretary of Defense, in consultation with the Director of the Defense Logistics Agency, shall standardize the design of future ground combat uniforms. The future ground combat uniforms designed pursuant to this section shall be designed to--
(1) increase the interoperability of ground combat forces;
(2) eliminate any uniqueness that could pose a tactical risk in a theater of operations;
(3) maximize conformance with personal protective gear and body armor;
(4) ensure standard coloration and pattern for the uniform;
(5) be appropriate to the terrain, climate, and conditions in which the forces may be operating;
(6) minimize production costs; and
(7) minimize costs to the services for issuing the new standard ground combat uniform.

The problem with this latest of the "new and improved" combat uniform is that now we have so many versions and colorations that the Army and the AF look like shoppers at an Army Navy store. At least the Marines have stuck with their digitized cammies.

My fear now is that this will somehow revive yet another round of AF cammie changes. I think we are on maybe the 8th or 10th version of PT clothing. I can visualize some clingon at HQ USAF submitting a design for blue background with white CU shapes all over. As an old Chief, this constant stream of mandatory uniform changes has always made my blood boil because it is absolute hell on the pocket book of the young airmen who are struggling to get by on the pay we give them....grudgingly. As a friend of mine once lamented, "If I see an AF guy drive up in a car and get out with a shiny silver helmet with a large red plume on it, complete with a long tail neon red jacket with a huge sash dripping ribbons....there is no way in hell I am challenging him for being out of uniform as it just might be the latest thing."

We are still struggling with up armoring, updating weapon systems, paying for rotations.....and we waste money on current fashions.

Neal, that was my same initial reaction. You may wonder how an O-3 can complain, but if you factor in the signing bonus and uniform allowance, an E-3 in my unit makes a LOT more per drill. Three x new sets of ACUs (or whatever we're going to call them) cancels out one full drill, which is roughly worth all my (non-mortgage) bills per month).

All I thought about when I saw this was another trip down the road to Devens..

But Cliff, thanks for sharing.