Enroute to Class on Thursday, I stopped by the VFW for the early part of the John MacDonald party to declare his candidacy for City Council.  I saw the new Blogger, Jack Mitchell there, as well as other folks I know from both parties and no parties and people from out of town.  The City Council race is non-partisan and that may well be a very good thing.  People I saw included Tom O'Brien from the Lowell Republican City Committee, as well as Pat McCartin from same.  Sam Meas was there, as was Sam Poulten, who apparently doesn't know me from Adam's Odd Ox, but has a beautiful wife.  I saw Paul Sweeney, perhaps checking out the operation for local non-partisan PAC Move Lowell Forward.  Local Lawyer Jay Gaffney was there as well as City Councilman Kevin Broderick (we talked about ENEL and the dam).  But I was only there for a short time.

Here is a photo of John at the VFW, in the upstairs meeting room. 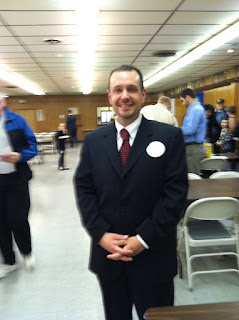 John's last name is close to my wife's family name, McDonald, so that allows me to warm to him a little more.  He has that extra "a" in his name.  I also like that he is an Air Force Veteran—both the Veteran part and the Air Force part.

Here is John's Web Page, with a nice photo of him, his wife and their daughters.

I also like John's call for Respectful Leadership.  Anyone in an elected position in City Government needs to be providing leadership.  Leadership is often about providing a moral look at things, not just down, but laterally and upward.

As for a Vision, John says:  "I offer a vision that honors the past, but focuses on the bright future of Lowell."  I like it.

He lives in Lowell, he served his country, he has a business background and the fact he is new on the scene of politics is refreshing and I am glad he declared his candidacy...and I like the word respectful.

Pro: MacDonald gets it. He said, 'I want to help make Lowell a place were my kid's kids will want to live.' 1000 yeses to that.

Con: He has assembled a team that is mostly from Lawrence. I said Lawrence. Need I say more?