For John, BLUF:  No, not the yellow of cowardice, but the yellow of attracting attention.  Nothing to see here; just move along.
Last week, down in Virginia, Southbound on US 29, I found this car turning left into the Stonewall Shopping Center (Big Wegmans). 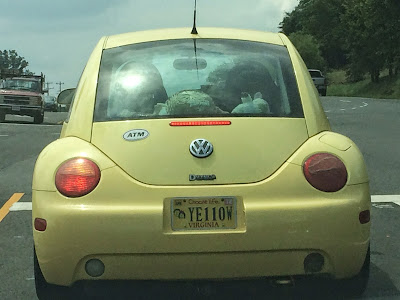 Not only is the Super Beetle yellow, but so is the license plate, and the characters on the license plate spell out "YE110W".  The owner is into Yellow.  My wife noted the "Oval", which has ATM.  Maybe the owner has teenage children.

At the time I thought the license plate was a Gadsden Flag plate, because it is yellow.  No, this was a license plate about children.  And that is a good sentiment.  But it wasn't the droids I was looking for, I realized when I looked closely at the photo after I took it.

On the other hand, I did find a Gadsden Flag plate, in the Lowe's parking lot at Virginia Gateway Shopping Center, northeast of the intersection of US 29 and State 619 (Linton Hall Road). 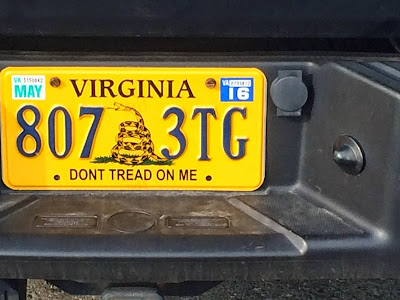 Then, just today, out in front of Christ Church United (UCC), a Church on East Merrimack, I found this car, apparently owned by a sailor. 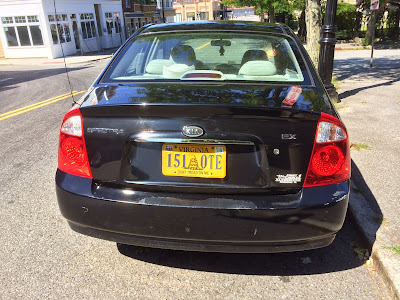 I wonder if we get to have a Vanity Plate, in yellow, with the coiled snake and the motto "Dont tread on me"?♠  Probably not.  The bien pesant would think it too offensive.

♠  No apostrophe in the original.

Hey, that's black car is mine! Grabbed your card of my windshield and threw it in my wallet. Been wanting to visit your blog, but just never got to it until now. Just left Virginia after a stint in the Navy. Now a resident of Lowell, thanks! Not a Lowell native, but love the work you are doing for it and the world. If only more people had minds like ours.