For John, BLUF:  Our Federalized system seems pretty good and its inventors pretty smart.  We just need to not mess it up.  Nothing to see here; just move along.
Scotland says No, but the British♠ Prime Minister, Mr David Cameron, says there will be more devolution to come, with legislation in January.

The vote seems to have broken 55% against and 45% in favor of separation.  If it was a US Presidential election we would call it a landslide, but with such a large percentage saying separation, there will need to be some fence mending.  Maybe even in Dracut. 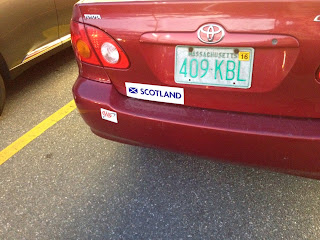 The key point to draw from this quick analysis by The Wall Street Journal is that centralization of government, as with the European Union may have peaked and the wave of the future may be moving authority back closer to the People.  As populations increase the distance from Government for any one individual or any group seems to get greater.  One way to prevent disaffection is to make local control a reality.

Mr. Cameron said work would begin to grant the devolved government of Scotland more control over tax, spending, and welfare, with a view to forming plans by November and draft legislation published by January.

"To those in Scotland skeptical of the constitutional promises that were made let me say this—we have delivered on devolution under this government and we will do so again in the next parliament," Mr. Cameron said following the result. "The three pro-union parties have made clear commitments on further powers for the Scottish parliament—we will ensure that those commitments are honored in full."

In a surprise proposal, Mr. Cameron also said England, Wales and Northern Ireland should have greater independence in how they govern their affairs.

♠  The United Kingdom is Great Britain and Northern Ireland.  Great Britain is England, Scotland and Wales (and for the folks from Cornwall, Cornwall).  England is the bottom half of the island of Great Britain, minus Wales to the West and (and Cornwall to the Southwest).  Wales is that wonderful place with the very long town names located to the West of England.  Then there are some strange arrangements with some of the other islands of the British Isles.