Yesterday the CBO issued its latest Long-Term Budget Outlook.  It is not good news.

The CBO (Congressional Budget Office) is an instrument of the US Congress, and supposedly non-partisan.  And here is the page with the link to the spreadsheet and the summary, which is quoted below regarding the long term consequences of our growing Federal Debt:
UPDATE:  I have added a chart, below, made from the numbers, showing the long term outlook for Federal spending.  The numbers are percentages of Gross Domestic Product (GDP). 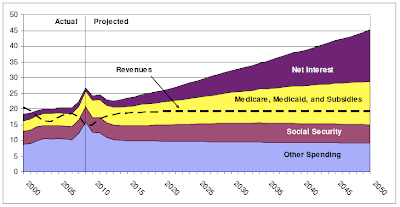 Note how the interest on the debt grows.  That is money that is flowing from the poor and middle class to the rich—and flowing more and more overseas.  Then there is the medical costs to the Federal Government.  Given that the dashed line is revenue, somewhere out there lurks a tax increase.  So, yes, we are talking about our children and grandchildren.

In today's Boston Globe there are a number of letters against Senator Scott Brown♠ over his stand on the Wall Street Reform Bill and the extension of unemployment insurance.  It would seem the Senator is standing by the "Pay-As-You-Go Act", as explained by the CBO report:

In February 2010, lawmakers enacted a new version of some of the budget enforcement procedures that were in effect in the 1990s. The Statutory Pay-As-You-Go Act of 2010 (Public Law 111-139) aims to make sure that most new legislation affecting revenues or mandatory spending does not increase federal budget deficits.♥

And here is another little known Blog talking about Senator Scott Brown and "pay as you go".

And, Senator Brown has worked to keep down taxes (those bank taxes would come out of the pockets of those using the bank services) and to provide offsets for the extension of unemployment benefits.  As for Medicaid money, Senator Brown, per The Boston Globe (Wednesday dateline):

U.S. Sen. Scott Brown is offering a compromise to provide states with Medicaid money they critically need while not further expanding the national debt.

In a video news release on Wednesday, the Massachusetts Republican said he was filing a bill that would reallocate unspent federal stimulus money to provide the state's with the added Medicaid money. Massachusetts alone is waiting for about $700 million in funds and has had to make budget cuts assuming it won't materialize.

Brown says there's about $37 billion in unspent stimulus money that could be used for the states. He also proposes to cut "wasteful and unnecessary federal spending in other areas."

Note well that in these kinds of economic times, those with an initiative and without an offset are liars and a thieves.

The other option, of course, is to just print money, until a bottle of milk costs a thousand dollars or more.  (Hint:  It can happen here.)

♠  It was about a poll where Senator Scott did better than Senator Kerry and one writer suggested that if Senator Kerry got the same coverage as Senator Brown he would be higher.  Frankly, I wouldn't bet on it.
♥  The Statutory Pay-As-You-Go Act does not apply to discretionary funding provided in appropriation acts or to any legislative provision that the Congress designates as an emergency requirement.
Posted by C R Krieger at 12:14 PM