The last time my wife's family got together here in Massachusetts her cousin, a renowned historian of the Middle East (a PhD from Harvard) suggested that Mansur Street was named after some Syrian who was part of the migration of Syrians to Lowell to work in the mills.

I was not against the idea that Mansur was a Syrian, but I wasn't sure that it made sense, given that Mansur Street is in the Belvedere section of Lowell, where the mill owners lived, vice the other sections of Lowell, where the mill girls might be living.  Of course, my wife's cousin might have just been pulling my leg, but in the back of my mind, money was riding on this question, so I did a little research.

In doing my research I received a lot of help from the UMass Lowell history archives personnel and from the Lowell Engineers Office, as well as the Lowell Library.  All were very helpful and I offer them thanks here.  Also, as I was wondering around I ran into a couple of people who remembered Syrians in Lowell back in the 1950s and 60s.  But, the mention of Syrians appears to not go back much further than about 1900, as per the National Park Service and their publication, Ethnicity in Lowell.

In contrast to the 1900 date, the records in the Engineers Office show a "Resolution laying out and establishing grades of Mansur and Fairmount streets" passed 27 September 1853.  This goes along with the Massachusetts Historical Commission report on the Mansur-Richardson House, at the intersection of Mansur and Nesmith Streets (172 Nesmith), erected circa 1845 by a Stephen Mansur. 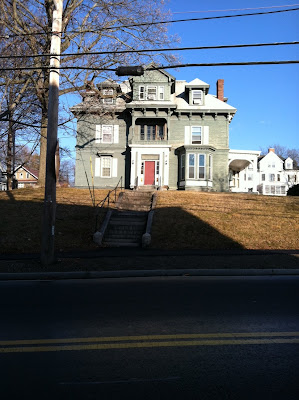 Mansur-Richardson House
Mr Stephen Mansur was born in Temple, New Hampshire in 1799.  Mr Mansur arrived in Lowell in 1822 and in 1830 entered into a partnership with an Alonzo Child to found the Mansur & Child hardware and crockery business.  It is suggested in the Mass Historical Commission report that he helped to build the Eire Canal and then came to Lowell to help widen the canal between the guide locks and the old Lowell Machine Company shops.  He passed away 1 April 1863.  In his time in Lowell he was an twice elected to the Massachusetts House of Representatives.  In 1857 he was Mayor of Lowell.

The Mansur family of Lowell, Massachusetts, spring from Robert Monsieur, a French Huguenot, who came to Charlestown, Massachusetts, at an early day, he being known there as the "Crazy Frenchman", his vivacity and unusual way being in such contrast to the Puritans.  The same soon became anglicized as Mansur, and his descendants were found all over the United States.  Robert Monsieur married Elizabeth Brooks, June 6, 1670, according to Charlestown records, and it is known he was living in 1678.  The line of descent from Robert Mansur, the founder, is through his son, John Mansur; his son John (2) Mansur, who settled in Temple, New Hampshire; his son William Mansur, born in Temple; his son, Stephen Mansur, born December 8, 1773, his son Stephen (2) Mansur; his son William Gage Mansur, born in Lowell, Massachusetts.

I am thinking Mansur street is named after some Frenchman.  Not a French-Canadian, but one of those people who came to the Massachusetts Bay Colony within forty years of its founding.  One wonders to what degree his Huguenot background disturbed the Puritan balance in the area.  Since he wasn't run out of the colony, one must assume not much.

Not to upset the apple cart on this....but I've located an interesting rebuttal to your theory of origin.

Quoting from Wesleyhardenzone.com: ORIGINS OF THE MANSURS OF New England

The name Mansur is not a corruption of any similar French name. It is derived from the old NORMAN MANSUR, which was a Christian name and by the Normans introduced into England, but not now frequently met with in England.

The earliest mention of the name in New England occurs on the marriage record of Charlestown, Mass., and it is there spelled "er".

James Manser was a passenger to Barbados, on the "Alexander" May 2, 1635. See Drake’s Founders of New England. He was age 27.

"The name is from Richard Manesier, Normandy 1198. Quotation from "the Norman People" by Henry S. King and Company

It is probable that the Mansurs in this Country came from IPSWICH, ENGLAND. There was at that time a family spelling the name just that way living in Ipswich, and one of the men was a mariner. He may have owned a ship which came to this country, or have been in command of one, and have brought a relative over, and that relative may have become the ancestor of the family in this country; that would account for one of the name being listed among the passengers of any of the early vessels.

Charlestown was the center of a settlement of many fishermen from the Isle of Jersey. It is possible that Mansur was one of this group. The argument against this view is that the "er" has always been sounded, while in the other cases the spelling has been changed to agree with the pronunciation.

Charles Harley Mansur in 1891 wrote to John H. Mansur that he has heard the tradition that the family went to England with William the Conqueror from Normandy; heard also that early in the history of New England three members came from England, and two were killed in a battle with the Indians, and that all Mansurs are descended from the other one.

I had come across that alternative version, but the French Huguenot version has a certain romantic flair to it.

Either way, it is French, unless you don't think of the Normans as French, compared to the English in 1066 who certainly did.

To quote a friend of mine who is French....."Even the French don't like the French." I suspect that the Norman's regarded themselves as....well....Normans. To this day, natives of Provence regard themselves much more citizens of Provence than of France...even down to the local dialect.

I think the only folks who regard themselves as truly French are the Parisians....and they don't like anybody.

Well either way you can be comfortable knowing that the street name is taken from a Frenchmen who left France while they still had a pair.

I have traced my heritage back to Robert Manser as well... But whether he is french or english... I can't find his father. Any ideas or resources?

My two sources were the Pollard Memorial Library, here in Lowell (Refernce Room has some books on early Massachusetts folks) and an historical office of UMass Lowell, again with some books.

If you don't live near here you can EMail me.