For John, BLUF:  "Stay calm and carry on".  Nothing to see here; just move along.
"RUSSIAN JET FIGHTER DID BARREL ROLL OVER U.S. RECONNAISSANCE PLANE – CNN".

This is based on a Reuters report with reporting by David Alexander and Idrees Ali; Writing by Eric Beech; Editing by Mohammad Zargham and James Dalgleish.

A Russian Sukhoi Su-27 jet fighter did a barrel roll over [around?] a U.S. reconnaissance plane in international airspace, CNN said on Friday, citing two U.S. defence officials in the Baltic Sea region.

The U.S. Air Force RC-135 plane was flying a routine route in international airspace when it was intercepted by the Russian SU-27 fighter, the Pentagon said, in the latest in a series of similar incidents between the U.S. and Russian militaries.

The Russian fighter came within about 100 feet (30 meters) of the American plane as it performed the dangerous, high-speed maneuver, CNN reported, citing two U.S. defense officials in the Baltic Sea region.

First off, can we agree that while both aircraft were traveling at (relatively) high speed, the relative speed between the two aircraft was probably less than the speed of a car on Andover Street, here in Lowell, Mass?

Second, approaching within 100 feet is not like the Su-27 was flying wing tip formation off of the RC-135. Can there be untoward events?  Absolutely.  See this mid-air collision between an F-104 and one of two XB-70s, back in 1966.  Then there is the Chinese pilot who let his aircraft drift into a US Navy EP-3, with unfortunate results for the Chinese pilot.  You can watch the moments before the accident here.

Have we discussed the attitude of the Chinese recently?  Yes, here.

Aircrews have been doing this for decades.  I remember stories out of Keflavik, Iceland, about us intercepting Soviet BEAR Bombers penetrating the GIUK Gap and the guy in the bomber side scanner blister holding up the latest Playboy foldout, which the Soviet Washington, DC, Embassy had sent back by courier before the Boys in Blue in Iceland got their copies.  All good clean fun, except for the nudity part.

Here is a picture of a Quick Reaction Alert (QRA) Typhoon F2 from Number XI Squadron at RAF Coningsby escorting a Russian Bear-H aircraft over the North Atlantic Ocean. 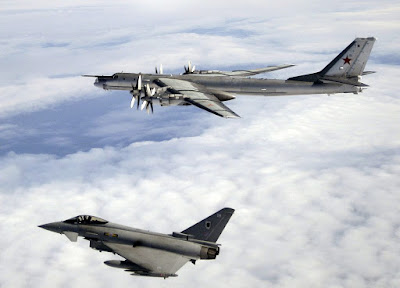 Sure, there is always the chance someone will do something stupid (either side), but our current reaction, it seems to me, if not tamping down anything, but is helping puff up President Putin's chest.  I worry that a new US President, after 20 January next, will over react, so as not to appear weak, and then we will have problems.

If I was the designated advisor I would advise we calm down.

Hat tip to the Fortuna's Corner.