For John, BLUF:  The thing is, you have to train for both.  Nothing to see here; just move along.
From the web magazine War on the Rocks we have Air Force Colonel Mike Pietrucha and "REDISCOVERING LOW ALTITUDE:  GETTING PAST THE AIR FORCE’S OVERCOMMITMENT TO STEALTH".

Ah, the never ending argument.  My Staff College classmate,♠ Indian Air Force Squadron Leader Trevor Osman♥ summed it up.  "You fly over the SAMs and around the Army formations."  Why?  Guns.  Or as I would kid my Royal Air Force classmates, you like low level because the UK has gun control and you have never learned to fear guns.

Mostly I am posting this article so that Mr John McDonough can read the tail number♦ on this Wolf Pack♣ F-16C at low altitude, with the afterburner burning, mostly likely over the Republic of Korea. 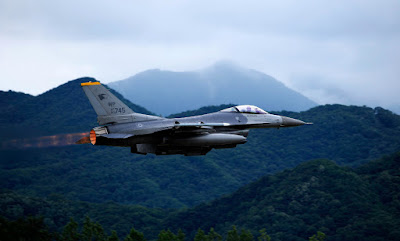 Lots of charts and hanger flying in this article.