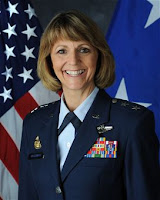 Seventeenth Air Force, in which I have proudly served, twice, used to be part of United States Air Forces in Europe and is now part of US African Command, as the Air Component.

As one wag put it:

There is an enormous value, I would suggest, to a national capability to rapidly penetrate enemy defenses from a secure base (and, this speaks not just to B-2s, but to submarines as well...).  21st century conflicts are not all about PRTs and tea drinking.

The question now is, can we put this one away quickly, or are we into a long exercise in which we are helping someone we might not like very much replace someone we know we don't like.

On City Life this AM, the Producer, John McDonough, suggested we send in some high quality capability and just take out Qaddafi (or is it Kadaffi, or is it...someone sent me an EMail this AM with a new spelling, but that is a different blog post).  I think that won't work for two reasons.  The first reason is that we can't always get to the person with some Special Forces sniper team and dropping a bomb or cruise missile requires great intelligence and good timing.  The second reason is that the chain of succession might cough up someone even worse.  Lenin was bad, but Stalin was worse.  I am reminded of a quote I once say, attributed to one of those Post-Modernist philosophers, Herbert Marcuse, "Abolish the Weimar Republic; whatever follows can't be any worse."  Of course what followed was the Führer, Adolf Hitler.  So much for that idea.

There is the other idea that we don't wish to have war descend into mutual efforts at decapitation.  Such a direction would distort the place of national leaders, causing them to become ever more protected and out of touch.  It would also lead to more and more violent efforts at decapitation, until tens of thousands are being killed as collateral damage in an effort to get one person.

Finally, there is the fact that a nation trying to maintain peace by means of decapitation would soon lose the good will of the rest of the world and that good will is valuable and leads to cooperation on many fronts.

The present system is inadequate, but available options don't offer much either.

Interesting career path for a JFACC. All of her time is in non-TAF assignments...but GOOD ones. She was the 2 year commander of the 89th and then as a BG...18AF/CC at Scott...and is now a frocked MG