For John, BLUF:  Another Great American moves on.

This Washington Post article is about Sequestration, and its impacts, but it mentions the late Frederick C "Boots" Blesse, author of No Guts, No Glory, a short booklet about being a fighter pilot.  The article is "Funeral flyovers squeezed by sequester, but fighter ace ‘Boots’ Blesse gets a final salute", by reporter Michael E. Ruane, and published on 22 March. 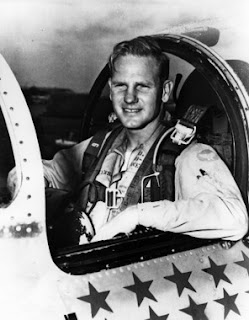 Overhead, four gray F-15s roared across a cloudless blue sky, and one pulled out of formation and shot upward, signifying a departed pilot.

It was a majestic salute. But because of “sequestration” budget cuts, Blesse, who died in the fall at 91, might be one of the few getting such an honor this year.

The Air Force has decided that it will no longer do public flyovers at graduations, air shows, sporting events and funerals. That decision went into effect March 1. The Pentagon issued a similar decree for all services, effective April 1.

But the Air Force and the Pentagon allow special consideration for funerals. And Air Force Vice Chief of Staff Gen. Larry O. Spencer approved funeral flyovers Friday for Blesse and for Maj. Lucas Gruenther, who was killed in a training crash Jan. 28 and was being buried in Colorado.

Wendy Varhegyi, an Air Force spokeswoman, said the service normally would do flyovers at about 1,000 public events a year.

It is worth noting that General Blesse died 31 October of last year and was just buried at Arlington.  This has nothing to do with the Sequestration and everything to do with the scheduling problem faced by the people running Arlington National Cemetery.  This delay is not unusual.  Note that the burial of Major Lucas Gruenther, in Colorado, was much quicker.

I met General Blesse, after he retired.  The then Commander-in-Chief♠ of United States Air Forces in Europe, the late General Charles L Donnelly, Jr, was bringing retired fighter pilots to Europe to talk with the young fighter pilots about how it was in the old days.  I had a short conversation with General Blesse.  He asked and I told him I had been in the 366th Tactical Fighter Wing at Da Nang Air Base in 1966.  He noted he was there in 1967.  He then noted that when he was the Director of Operations for the Wing he instituted the practice of carrying the SUU-16 gun pod in place of the 600 gallon centerline fuel tank on missions escorting bomb dropping aircraft over North Viet-nam, thus making the 366th "The Gunfighters".  The SUU-16 housed the M-61 Vulcan (20 mm "gatling gun" cannon) and 1200 rounds of ammunition, which was fired off at the rate of 6,000 rounds per minute, which was about 12 seconds of firing time.

In my own tactless way I explained that actually that tactic had been developed by then Major Bob Dilger♥, a half a year earlier.  The reason the 366th stopped carrying the SUU-16, with the M-61, into the northern reaches of North Viet-nam was that one of our Aircraft Commanders jettisoned one into Haiphong Harbor when he thought he was running out of gas.  So much for that good idea.  As a bonus point, I said that Major Dilger did get a MiG Kill, scraping one off on the ground during some fancy aerial maneuvering.

And here is the "unofficial" patch for the 366th Wing while it was at Da Nang, flying as the "Gunfighters", which just means that until the arrival of the F-4E, Da Nang was the only F-4 PHANTOM outfit taking guns up into Route Packages V and VI of North Viet-nam.

♠  Up until Donald Rumsfeld became Secretary of Defense we had theater commanders who were "Commanders-in-Chief" and their Service Component Commanders were also stylized as "Commanders-in-Chief".  However, Mr Rumsfeld felt that since the US Constitution designated the President as "Commander-in-Chief" no one else should have the title (in the US), notwithstanding common English usage.  Mr Rumsfeld erred.
♥  From an article in DoD Buzz, back in 2009:  "Col. Robert Dilger (USAF, ret.), an F-4 fighter tactician in Vietnam (187 missions) and then chief air-to-air instructor at the Fighter Weapons School, became A-10 Armament Director in charge of the 30mm cannon, the massive 30mm ammo war reserve production program (reducing its costs by a factor of 8), and the pioneering live fire effectiveness tests of the 30mm against loaded Soviet tanks in formation."