For John, BLUF:  There actually are Evangelicals around here.  Asking me off line.  Nothing to see here; just move along.
There has been some talk this election season about how self-identified Evangelicals are voting.♠  Aware of that, PEW Research has come out with a discussion of the issue.

There are several graphs in the article, but this is a good one for capturing how big is the Evangelical vote.♥  In looking at the chart, please keep in mind that Evangelical and Christian are not the same set of people.  Evangelicals are Protestants, as opposed to Catholics and Orthodox.  And not every Protestant would consider himself or herself an Evangelical.♦ 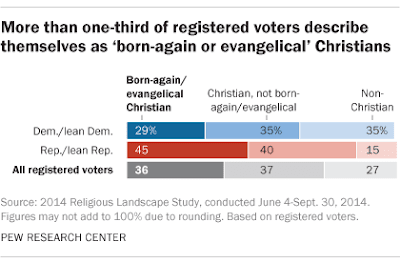 So, yes, Evangelicals, self-identified in Exit Polls, are a factor in recent Republican Primaries, and they seem to be breaking, strangely enough, for Mr Trump.

♠  And there are other issues, such as the assertion that Senator Ted Cruz subscribes to "Dominion Theology".  There is the view that this is pretty much nonsense, stirred up by those looking for an issue.  It isn't like we are talking Daesh and the Caliph, Dr Abu Bakr al-Baghdadi.
♥  Evangelicals believe in salvation by grace through faith in Jesus Christ's atonement.  They are apt to ask someone if "they are saved".  This movement grew out of the Great Awakening that swept the United States and UK in the late 18th Century and the first half of the 19th Century.
♦  Having said that, there are Catholics and Orthodox who think and believe like Evangelicals in terms of their relationship to Jesus and the need for evangelization of the world.  A Venn diagram inside a larger circle.