Population Decline and Recession and Collapse


For John, BLUF:  Sort of like Climate Change, first Demographic trends were toward overpopulation and now it is toward demographic collapse.  Nothing to see here; just move along.
The Beeb gives us "Japan population shrinks by one million census confirms"

New census figures in Japan show the population has shrunk by nearly one million in the past five years, in the first decline registered since 1920.

As of October last year the country has 127.1 million people, 0.7% fewer than in the last census.

Demographers have long predicted a drop, citing Japan's falling birth rate and a lack of immigration.

The rapidly ageing population has contributed to a stagnating economy and worries of increasing health costs.

Here is a chart from Wikipedia: 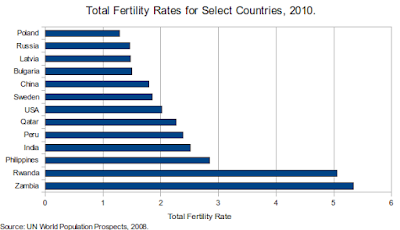 The key number here is the Total Fertility Rate, somewhere between 2.1 and 2.33 (2.5 to 3.3 in developing countries because of higher mortality rates) being the target.  That is the number of births to women in the population to sustain the population.  All women.  Even those who never have children.  It is an average of the children of the breeders, divided by all the women.♠  Men are not relevant to this number, except in terms of helping with conception.

This is about the population.  Some think it should fall, so that we have a nation better for the environment.  There is the Negative Population Growth group.  From Wikipedia:

NPG believes the optimal population for the United States is 150 to 200 million and that the optimal world population is two to three billion.  In order to accomplish their goal of a smaller U.S. population, the organization promotes policies which would reduce the fertility rate in the U.S. to 1.5 births per woman, and they advocate for reducing the level of immigration into the United States to 100,000 to 200,000 per year from the existing level of over 1.5 million per year.

On the other hand, there is the question, asked in the above linked article from The Beeb, if a shrinking population can sustain any kind of a welfare state, including a minimal one, like the United States.

And, if population decline leads to recession and, eventually, collapse.

I am for increasing population and having a reasonable immigration rate, to allow the US to grow.

So, what should we think of this?

♠  I am a member of a Dinner Group, a mixed group of men and women.  There are six women who show up fairly frequently.  Amongst them they have had 12 children.  The math suggests this is a somewhat more fertile group than the national average, but not a sustainable number.
♥  We should thank Ms Ivanka Trump, who is expecting her third child.  She is helping to sustain the American population.  Ms Clinton?  Not so much.  Nor her daughter, Ms Chelsea Clinton, but there are still opportunities.  Not saying she should have more children, as a moral duty, but it means others have to make up the difference.  Averages.
♦  And shrinking.  😀
♣  Remember, immigrants are one thing and refugees are another, or for more clarity, migrants and refugees.  Refugees are fleeing a bad situation, and while some of them may, later on, wish to become immigrants to the United States, the assumption is that they will be returning to their countries of origin.