Mr Trump From An Historian's Point of View


For John, BLUF:  It isn't that Mr Trump is so bad as it is that the others are actually worse.  Nothing to see here; just move along.
This morning, on Democracy Now, Host Amy Goodwin interviewed Boston University Emeritus Professor Andrew Bacevich.♠  The headline is "Andrew Bacevich:  Why Is No Candidate Offering an Alternative to Militarized U.S. Foreign Policy?"

I mean, my—one of my points with regard to Trump is this.  There are those who compare him to a fascist.  I don’t think he’s a fascist, because however evil it may have been, fascism did imply some sort of a coherent ideology.  Trump has no ideology.  He shoots from the hip.  He contradicts himself.  He speaks in generalities.

I actually think this is a complement to Mr Trump.  Presidents who are rigid adherents to this or that ideology are not as good as Presidents who have some flexibility in the execution of their office.  President Lincoln was focused on keeping the Union together and was willing to sacrifice other goals to that prime goal.  President Wilson showed no flexibility with regard to his League of Nations, which caused US Membership to crash.  On the other hand, President Franklin D Roosevelt showed great flexibility.  In today's terms, he ran to the right of President Hoover in 1932 and then governed to the left of the previous President.  President Jimmy Carter worked very hard to find a way to work with other nations, but even he finally had had enough with nations like the Soviet Union and Iran.  The President Reagan Military Buildup was really President Carter's military buildup, from when he reversed course.♥

Here is the other side of a coherent ideology.  It has had some bad outcomes.  Let us skip the Soviet Union♦ and move directly to the German National Socialist movement (unlike the original Fascists, Mussolini's Italians).  They were big into Eugenics.  Their ideology, following the settled science of the day, thought that some groups of humans were genetically inferior, which is why the regime emptied institutions for the insane and the disabled and killed off the inmates.  And, of course, the Jews.  If you are looking for an analogy, think of Margaret Sanger and her belief that Blacks were genetically inferior.  For the German National Socialists the genetically inferior group, aside from the "life unworthy of life", the insane and disabled, were the Jews.  With Donald Trump we at least have a statement of support for Israel.

Just before the above mentioned quote we have Professor Bacevich saying:

Well, the Iraq War was a big, fat mistake.  I mean, Trump, in many respects, is a blowhard, but from time to time he actually says something that is true.  What’s not true is his characterization of Islam.  It’s not simply that it’s not true; it’s that it’s utterly counterproductive.  It cannot provide the basis for any sort of meaningful policy, unless somehow or other a president Trump would be interested in promoting some sort of Armageddon-like conflict between the West and Islam.

Well, the Professor scores Mr Trump high for being lucky on Iraq, but then he shows his confusion about what is going on in the Middle East.  He suggests a President "Trump would be interested in promoting some sort of Armageddon-like conflict between the West and Islam."  Does Professor Bacevich not realize that our foe, Daesh, actually believes that these ARE the end times and that there is coming an "Armageddon-like conflict between the West and Islam"?  And Daesh is looking for a big, climactic battle, an Armageddon, to take place in the area of Dabiq, Syria.  Soon. 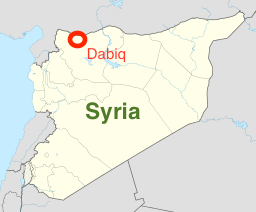 So, is Mr Trump wrong here or is he insightful with regard to our opponent Daesh, the group that is looking to recruit jihadists inside the United States?♣

♠  Skip Bacevich is a West Point Graduate and a retired Army Colonel, with combat tours in Vietnam and Iraq.
♥  The lesson learned is to not keep poking some animal with a stick, because at some point it will irritate the animal, earning a response.
♦  We are talking to an adherence to an ideology that killed tens of millions of people, more if you include Chairman Mao's Great Leap Forward.  Rigid adherence to ideology can be a very mad thing.  Some say you have to break a few eggs to make an omelette, but tens of millions is more than a few eggs.  It is killing not just opponents, but the friends and relatives of opponents and their friends and relatives.  It is senseless killing on a grand scale.  Ask your Cambodian neighbors.
♣  Let us be very clear here.  Only a small portion of Muslims are associated with Daesh.  But it is a pretty active portion.  And once the White House learns how to differentiate this small portion from the larger body we can move forward.