Left in Lowell had a blog post by Ms Lynne Lupien in July about bicycle safety.

The Sun reports that a boy was hit while on his bike in Gorham St, after dodging into traffic. He had no helmet and was seriously injured.

The City Traffic Engineer, and others, are working the problem and here are some of the results.  (Gerry Nutter also mentioned this, yesterday.)

Here is a photo of the new "Sharrow" system (Share Arrow), recognized at the State and Federal levels as reminding vehicle operators that autos and bicycles share the lane. 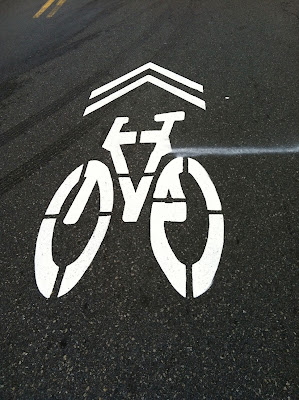 That is to say, a bicycle in such a lane owns the lane from the yellow stripe on the left to the curb on the right.  Auto drivers are expected to respect the bicyclist's rights.  Same for motorcycles.

When you look at the symbol you can see the front wheel to the left (the fork) and the rear wheel to the right.  It takes a moment, but it is there.

Out on Gorham Street I found the symbols to be about 80 paces apart, as this photo shows: 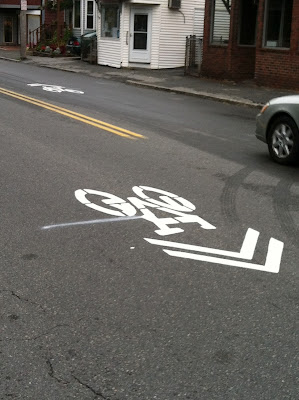 But, this is not the only symbol we will be seeing.  Out on Chelmsford Street (west of the Lord Overpass), we have an actual bicycle lane with a slightly different symbol. 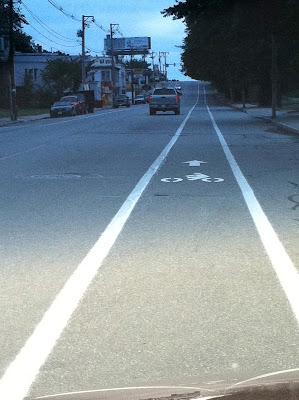 (This is Eastbound on Chelmsford Street.)

He also said that the City is out for bid to put traffic control at the intersection of Church and Lawrence Streets.&bsp That will be a good thing also.