For John, BLUF:  Not everyone uses a Red Cross on the battlefield to signal medical personnel (Per Geneva Convention, non-combatants). 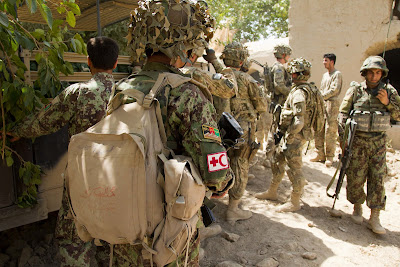 The medic, a member of the Afghan Army, is wearing the "Red Crescent" indication of his being a medic.  But, unlike US medics, he is armed.

Actually, he is wearing the emblem of the International Federation of Red Cross and Red Crescent Societies.

So, who is he signaling?  I would think his fellow Afghan soldiers.  "Hey, I'm your medic!"